Well, as predicted, it’s been a very mild summer thus far. I’m not complaining- I hate warm weather, so this is great. 😂 So far the heirloom tomatoes I planted are growing like crazy. No 🍅 as of yet, though. You can see strawberry plants either side, but so far […]

What even was this year?

It’s that time of year again when I write a reflective piece on the year that was. But… has it really been a year since the last one? Well- not exactly. The last one was posted on the 30th of December 2020, so I still have a week or so […]

What season is it again? 😅

So, apparently it’s supposed to be late spring- soon to be early summer… But this is Victoria we’re talking about, so between the sub zero temperatures last week, the pelting rain and severe winds, then the 25+ degree sunshine that followed… I’m not entirely sure what season it’s supposed to […] 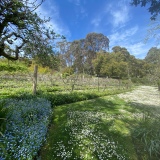 Well, it’s almost November (and the end of the year). Where did the year go?? 😱 Since my previous garden post, the snow peas have gone crazy… And the broccoli have sort of mostly bolted. There’s still some edible stalks left, but the weather’s been so unstable (typical) that it’s […]

Why hello there 🦎 We actually got some warm weather for the first week of September/spring, so we got to see some wee lizards poking their heads out from the garden beds. Unfortunately we’ll be back to cold, wet and somewhat miserable (I say somewhat, because I actually like rain) […]

For those that are new… (UPDATED)

Why hello there I thought I’d take this opportunity to re-introduce myself. First of all, welcome to my Blog, ‘A Bug’s Life’. I started this Blog two years ago while I was still doing my Ph. D in Bacteriology, with the intention of writing about what life was like as […] 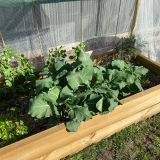 It’s been some time since my last garden update, but this is what’s currently going on in the garden beds. Right hand side garden bed has some dwarf broccoli, Italian parsley, sugar snap peas, a lone strawberry plant, and some rockets. I also threw in some forget-me-not seeds before, just […]

Just a short update on the autumn garden bed from the previous post. The seeds I sowed have begun to germinate! The above are dwarf broccolis… And then below we have some sugar snap peas. There’s also a pic of the yellow capsicum plant (there are also three red capsicum […] 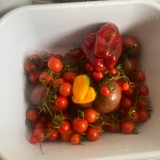 Just following up on the tomatoes from yesterday. I managed to wash and sort through them all so that I could at least process the ones that were ripe and ready to eat. I’ve also included photos of my capsicums! They’re very cute. 🥰 I’m looking forward to eating them […]

It’s been a while since I’ve written about my garden beds. With the temperatures quickly dropping (particularly where I am now, which tends to be colder than Melbourne), I decided to remove some of the remaining tomatoes and start on the autumn crop. Tomato season wasn’t the best this year. […]