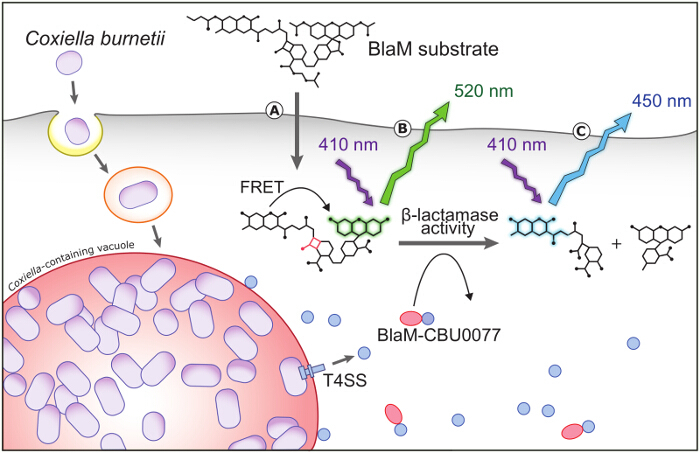 I posted about western blots and protein gels recently, but they’re actually more like a validation for some big experiments I did last week. These are the big experiments I was referring to in some previous posts. I needed some Coxiella strains that make different proteins for me (I’ve posted quite a bit on this), so that I could use them to infect some human cells.

So, when I say human cells, they’re actually cervical carinoma/cancer cells. We use cancer cells all the time in the lab because, well, they’re very hardy. Cells can divide and replicate, but every cell has a limit on how many times they can do this. Most cells replicate a few times before they close the curtain, but cancer cells… they’re practically immortal. These cells in particular are from a woman named Henrietta Lacks. There’s a whole story on how she never gave permission for her cells to be harvested, but now these cells can be found worldwide. They’re actually one of the most commonly used epithelial cell lines (epithelium is the outer layer of tissue, so these cells form a ‘skin’ like barrier around different structures) in the world.

Anyway, we have some HeLa cells (that’s what these cells are called), and we grow them in liquid culture media called DMEM (Dulbecco’s modified Eagle’s medium- weird name), with a bit of serum to boost the nutrient levels.

HeLa cells are epithelial cells, meaning they self-adhere to the surface of their container. When we grow them, they grow on the bottom surface of our flasks, our plates, etc. It takes about 8 hours at 37 degrees, 5% CO2 for them to gentle settle and attach.

So for my experiments, I can get these cells, count them, and ‘seed’ them into an assay plate that looks something like this:

We set up conditions in triplicate, so there’s three wells assigned for each condition in an experiment. If you look at it from the top, you’ll see wells that are pink, that have cells/samples in them, and clear wells that don’t have anything in them. You have 96 wells, so you can test many different conditions on the one plate.

Once I add my cells and leave them to incubate and self-attach, I can add my relevant Coxiella strains. Some strains make an artificial protein that I’m basically forcing the bacteria to make, so that I can study its activity. One portion of the protein is a Coxiella one, but the front portion of it is a foreign protein from another bacterial species (completely unrelated to Coxiella).

The yellow portion of these proteins is actually a bacterial enzyme that cuts/cleaves things called ‘beta-lactam’ rings. If you know your antibiotics, you may have heard of beta-lactam drugs. They’re your penicillins, amoxycillins, ampicillins… anything that ends in ‘cillin’, really. The yellow protein is called beta-lactamase, and anything that ends in ‘ase’ is a protein enzyme that can modify its target in someway. In this instance, beta-lactamase can cleave beta-lactam rings found in certain compounds. It gives rise to antibiotic resistances in certain bacteria, and makes beta-lactam drugs completely useless against them.

So why am I playing with beta-lactamase? Well, I’m not working on antibiotics, for starters, but we can use this enzyme to our advantage.

There’s a kit that we use, and this kit comes with a special chemical compound. This compound, called CCF2-AM, contains a beta-lactam ring. Under normal circumstances, when you bombard this compound with a specific wavelength of light (410 nanometres), it emits a green colour (or 520 nanometre wavelength of light). But! In the presence of beta-lactamase, this enzyme can cleave the beta-lactam ring in this CCF2-AM, and the structure changes (because it gets cut almost in half). When CCF2-AM is cleaved by beta-lactamase, the light emitted turns into blue (or 450 nanometres). This colour difference is key.

Lets add another layer of complexity (because, why not?)

I’ve got these infected HeLa cells. They contain lots of Coxiella. Healthy, normal Coxiella have this really cool mechanism of injecting (‘translocating’) bacterial proteins into the host cell, essentially by stabbing through membranes.

The crux of this experiment is to figure out whether a particular protein of interest (the red or blue protein in the ‘Plasmids’ diagram) is getting translocated (injected) through the T4SS, into the host cell.

Because I’ve physically fused my proteins of interest with beta-lactamase/yellow protein, if the protein gets translocated through the T4SS, then beta-lactamase will also be found in the host cell (outside of the bacterial cell).

SO (still with me?)- putting all of this together:

So what I can do is basically add CCF2-AM dye to my infections, wait a couple hours (for the dye to be absorbed by the HeLa cells and get cleaved/not cleaved by any beta-lactamase present), and then put it in a special machine and read how much blue vs green signal is getting emitted by the cells.

CBU0077/MceA is a specific Coxiella protein we know is translocated via the T4SS. When fused to beta-lactamase (BlaM), and is being produced by Coxiella, it will translocate out into the host cell, dragging BlaM with it. Out in the host cell, the BlaM enzyme will cleave any CCF2-AM present, and cause a shift in colour emission so that there’s more blue over green. The machine we use to read the plates spits out numbers, and we can calculate them to get a blue over green (450:520 nanometre) ratio.

You can look at it visually, too (rather than just as numbers).

The specific experiments I was doing last week used this technique, but at a more complex level involving infecting the same HeLa cell with different strains of Coxiella at the same time. It’s a little too hard to explain right now so I’ll leave it at that!

Hopefully this made some sense- it’s more just to illustrate how many layers an experiment can have (human cells, bacterial cells, plasmids, proteins, chemicals, light…), and how we can use natural systems (antimicrobial resistance) to our advantage.

A wet-lab based Bacteriology Ph. D student residing in Australia. View All Posts